Welcome to arachnids on stamps

I remember being fascinated by my father’s stamp collection. Not only was it a gateway to an incredible world of wonders, it was the biggest book of my parent’s bookshelf! I used to spend hours looking into it. One day, my dad bestowed upon me the greatest gift of all, he entrusted the collection to me. I have fond memories of continuing my father’s work.

The teenage years came and I moved on to other passions, such as keeping exotic animals. Almost four years ago, I renewed with my old hobby when I started researching stamps depicting arachnids. What first started as curiosity eventually became a project of creating an arachnid stamp catalogue. The philatelist in me had awaken.

This blog is an exhaustive listing of every arachnid related postal stamp I was able to source. One can decide how precise or how general a thematic stamps collection is to be. I decided to keep the horizons as wide as possible and included any subject that would remotely belong to arachnids. The reader will not only discover stamps with our beloved animals, but also inevitable stamps about astronomy/astrology (scorpio), Spiderman stamps, vague arachnid references (like a simple spider web for example) as well as arachnids shown on postal material but not on stamps themselves (generally on a souvenir sheet with stamps of a different theme). I would like to point out that for astronomy/astrology and Spiderman stamps, I decided not to collect them in an exhaustive manner (considering budget constraints). All the pictures in this blog are scans of my own material.

There are several well established stamp catalogues. The most known in North America is the Scott Catalogue (published in the USA). There are two main European catalogues, Yvert (published in France) and Michel (published in Germany). Logic would have dictated that I used either the Scott or the Yvert (French is my first language) but those catalogues are insanely expensive and a friend of mine had the Michel. That is the reason that all the stamps in this article are given the Michel number when known (I have them until about 2006). However, a French philatelist colleague was kind enough to send me the Yvert numbers for several stamps which I have included as well. If anyone would wish to send me the Scott numbers, I will be happy to add them in an updated version. It is in my plans to eventually purchase a complete Scott catalog when funds will permit.

For the purpose of this blog, I have created a vast number of categories to facilitate the search. I have included (as mentioned above) the Michel number (when known), the date of issue and the classification of the animal shown (if applicable). When known and applicable, I have also listed up-to-date taxonomic changes of the animals portrayed. Finally, I have also included, when possible, some personal notes and/or anecdotes that I thought worthy of sharing for certain issues.

I am hoping this blog will be interesting to anyone who has interest in arachnids. Other than sharing my passion, I hope it might be useful for anyone who would want to start a collection. When I instigated my project, I soon found that there was no complete resource on the subject on the web. Apparently, philatelists often confuse insects and arachnids, which leads to awkward listings by some.

In conclusion, I would like to thank my wife Amanda for all her patience during countless hours of research on the subject and for tolerating my spending sprees! I also wish to thank Rick West and Richard Gallon for private discussions on the subject, Eric Ythier for his help with the scorpion identification portion, Patricio Cavallo for the Spanish translations, Paolo Bassi for the Italian translations and Eddy Hijmensen for the Dutch translations as well as Paul Enrico for sharing his own finds on the subject.

Interesting yet funny issue called “Les Reptiles” (The Reptiles) of seven stamps. Despite it’s name, it only contains three reptile stamps. Two insects and two arachnids complete the set. As you will soon learn, it is not uncommon to find arachnid stamps mixed in series supposedly dedicated to insects, but this is the only issue that I know of where arthropods are confused with vertebrates!


Other stamps of this series:


For more information on this series, click HERE
Posted by Martin Gamache at 11:00 PM No comments:

Email ThisBlogThis!Share to TwitterShare to FacebookShare to Pinterest
Labels: 1. Spider (all)

For more information on this series, click HERE
Posted by Martin Gamache at 10:30 PM No comments:

Email ThisBlogThis!Share to TwitterShare to FacebookShare to Pinterest
Labels: 1. Scorpion (all)

*Abkhazia is a disputed territory. The majority of the world's governments consider Abkhazia a part of Georgia's territory . Therefore, their stamps are not valid for international postage.

The stamp in the lower left part of the sheet contains a scorpion, a spider and also a centipede. The funniest thing happened the other day. I brought my kids to their daycare and I discovered that they have that poster on one of the walls. Interestingly, all the animals are "identified" on the poster, so I am now able to pinpoint what is what!

The scorpion is labeled as Pandinus imperator, the spider as Avicularia avicularia and the centipede as Scolopendra gigantea. It is kind of funny since P. imperator is from Africa and the later two from South America. 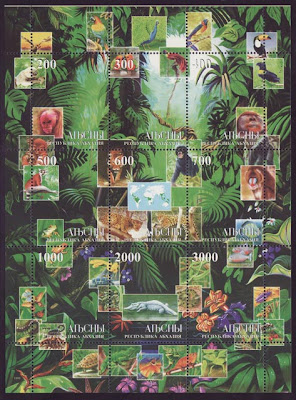 Email ThisBlogThis!Share to TwitterShare to FacebookShare to Pinterest
Labels: Country: Abkhazia* (1999a)


For more information on this series, click HERE
Posted by Martin Gamache at 11:00 PM No comments:


For more information on this series, click HERE
Posted by Martin Gamache at 10:30 PM No comments:


For more information on this series, click HERE
Posted by Martin Gamache at 10:00 PM No comments:

Email ThisBlogThis!Share to TwitterShare to FacebookShare to Pinterest
Labels: 2. Myriapoda

*Abkhazia is a disputed territory. The majority of the world's governments consider Abkhazia a part of Georgia's territory. Therefore, their stamps are not valid for international postage. There are several other local issues from former Soviet territories, visit my entries about Batumi, Khakassia & Chuvashia.

I had this issue for a while, but I just discovered while examining the scans closely that the species names are written at the buttom of the stamps.
Looks like most of the spiders artworks on this series are taken out of Kunstformen der Natur (Art Forms of Nature) from Ernst Haekel. I have used that plate's identification for the species of the  spiders on the stamps (most only have the genus, except Eris tricolor, that is note on that Ernst Haekel work).

This series is also available as imperforate. 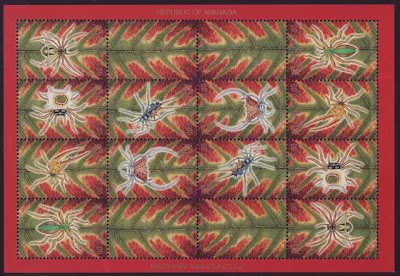 Other stamps of this series:

Email ThisBlogThis!Share to TwitterShare to FacebookShare to Pinterest
Labels: Country: Abkhazia* (1999b)

For more information on this issue, click HERE
Posted by Martin Gamache at 11:00 PM No comments: